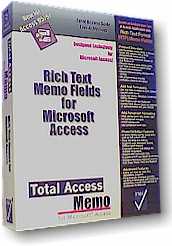 Add the Total Access Memo control to your form or report and bind it to a memo field. Press [Shift]+[F2] on the field to launch our editor, and when you finish, it is automatically saved in your table and displayed on your form. You can save and maintain both an RTF and a non-formatted (text only) memo field. 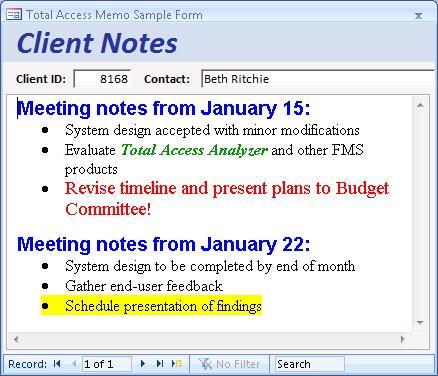 You can even import text files in RTF format, export the current field to an RTF file, or export to a text only file.

Total Access Memo 8.0 for Microsoft Access 95/97 includes many significant enhancements over version 2.0. The control has been expanded to support the following additional features:

In addition, the editor includes the following enhancements:

Total Access Memo is available in a single license or 5 license version. Contact FMS, Inc. to purchase additional licenses. Licenses are granted on a PER DEVELOPER basis. For each license, one designated developer can use the program on one computer at a time.

"Total Access Memo makes all the difference in my Access apps! Only Memo gives me fonts, colors, images and all the formatting tools I need. It's great!"